The building of the tiny 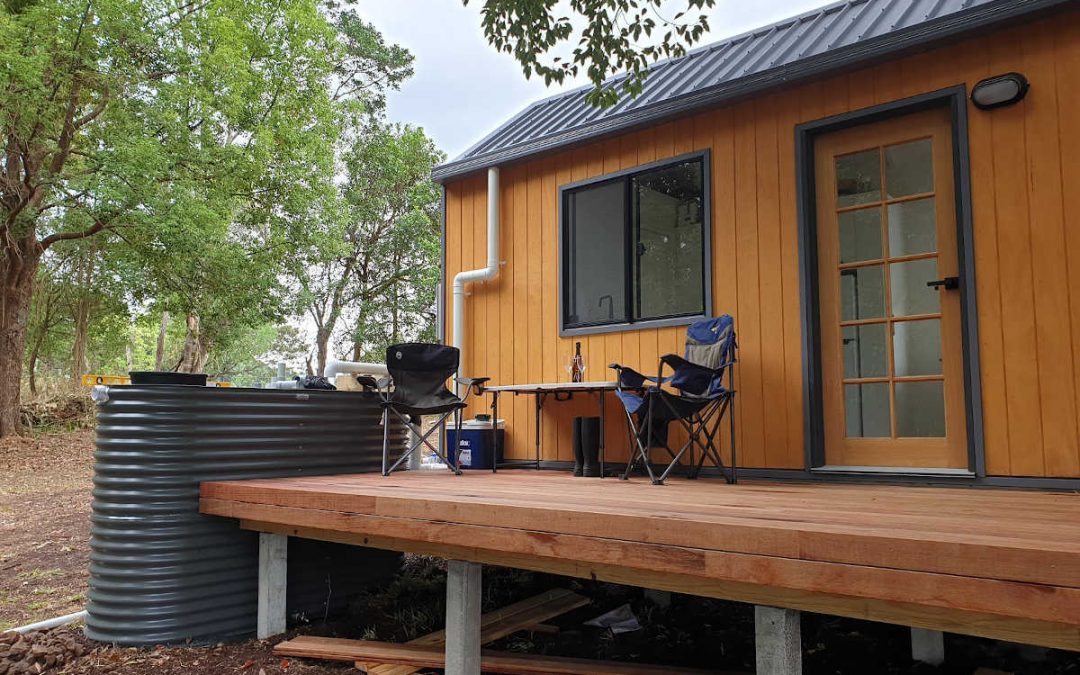 We didn’t build the tiny – it was ordered online. As you do.

There was a fair amount of research first – ranging from ebay to gumtree to google.  New or secondhand.  Buy or rent.  2 person or 4 person. And we kept coming back to a company in Queensland called Aussie Tiny Houses.

Due to our advanced age (!), they suggested a single level tiny house, so that we didn’t have to climb a ladder to the main bed.  It was a tough call – you get a lot more storage space with an upstairs bed, but it was also cheaper, and more spacious with a single level – you get the high ceilings that make you forget it’s really just a fancy caravan.

The original plan was to be completely off-grid, and there was research to see what appliances were possible on 12 volts – could we get a fridge, microwave and enough power to charge the Ryobi power tools each night.  But in the end, we decided that tradies would need reliable power during construction, and a temporary builder’s pole was going to be necessary.  So a few comforts got added – an air conditioner, and a gazillion power points and usb outlets.

We found a lovely electrician (on the second attempt at hipages) who liaised with the power company, installed the builder’s pole, and dug a trench to the rough position of the tiny – even before we arrived.

We had a tight schedule, working until Friday, packing the car, driving up on Saturday in two cars, staying in an air bnb for Sat/Sun, and then the tiny arriving on Monday, ready for work 🙂

Then came the bushfires.  Although the main route through Taree and Port Macquarie was in doubt, we decided to go ahead with the plan, leaving Gosford at 4am on Saturday. Drove to Raymond Terrace and hit the first snag. The Pacific Highway was closed.  We detoured via Gloucester, hoping to cut back above Taree.  No, that option was not available either.  Drove to Walcha, and met some lovely locals who were surprised we didn’t already have the RFS Fires App on our phones.  Detoured further to Tenterfield, another place I’d never been.  Drove through roads with active back-burning along the side,  past the smoke of Glenn Innes.  Finally cut back through Casino, and arrived 12 hours later.

The fire was 15km away in Nightcap.  My incredibly hard-working cousin David (whose property in Goonengerry we actually back onto!) warned us that Tuesday was forecast as catastrophic weather. And the council meeting at Mullumbimby had actually stated that Goonengerry Mill Rd was one of two roads that could not be guaranteed fire support.  So we postponed the arrival of the tiny for a week. That gave us (Carl) time to prepare the runners for the caravan to drive onto. They had to be level, exactly measured, and strong. We started clearing the lantana and tobacco weed at the front of the rainforest.

The fires kept burning, but they came under control. It was a big shock to everyone – that the Nightcap rainforest could burn at all. The Nightcap is technically the wettest part of NSW, which is a big reason why we chose this area – the theoretical reliability of water.  Those days are gone. The climate has changed, and people need to change too.   Expectations, lifestyle. Everything.

After a week of watching the weather and the bushfire, we decided it was safe enough to get the tiny delivered.  Ambitious as ever, we coordinated both the tiny to arrive in the morning, and the electrician to come in the afternoon to connect it.

The next morning was even more perfect. Coffee was brewed, espresso style. A fridge arrived from Mullumbimby and squeezed snugly into spot.

There was something refreshingly bubbly that night. And it wasn’t just our personalities…. 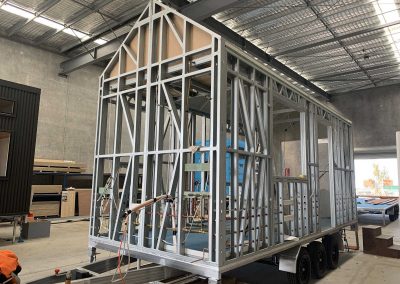 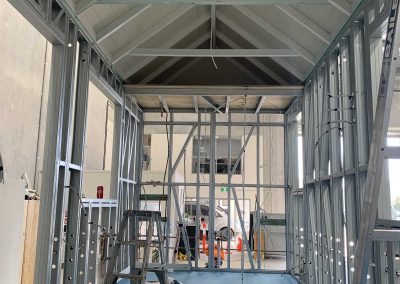 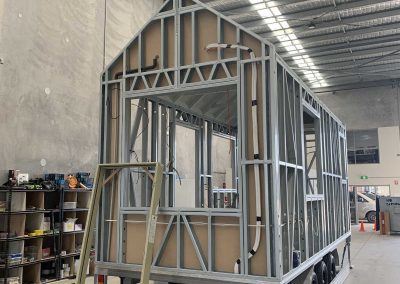 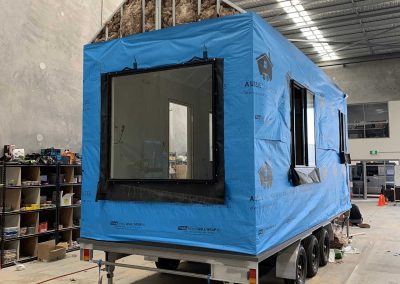 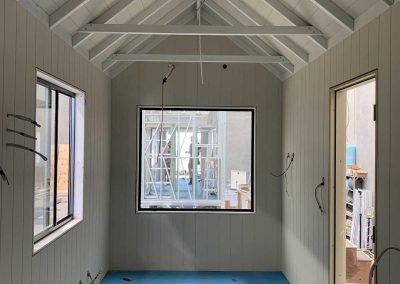 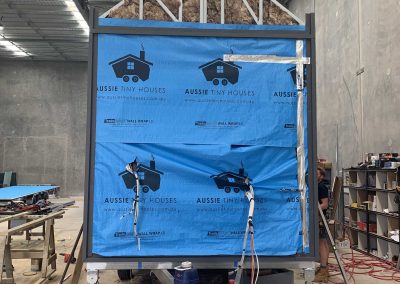 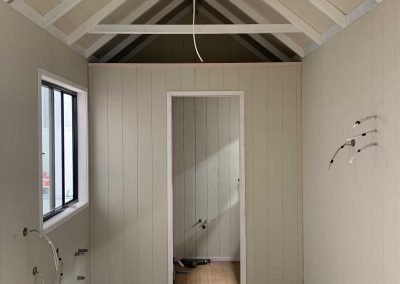 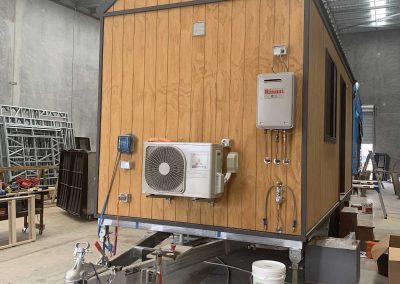 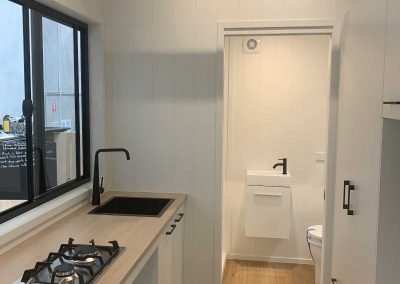 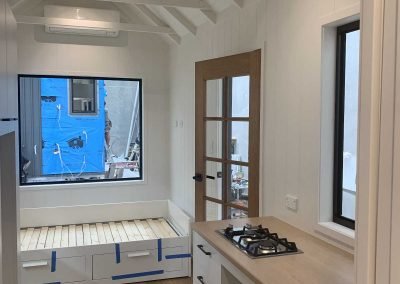 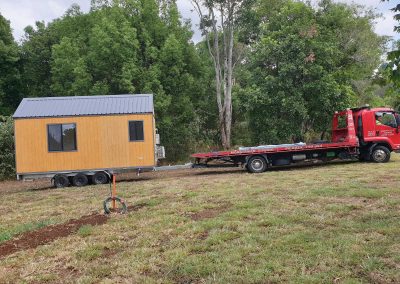 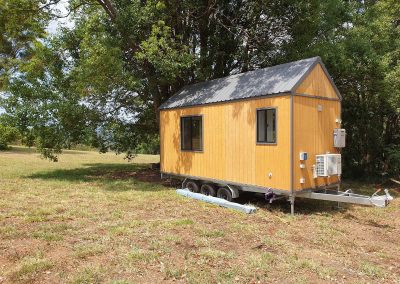 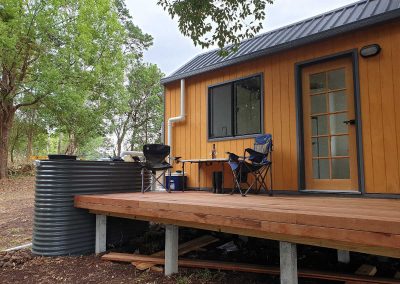 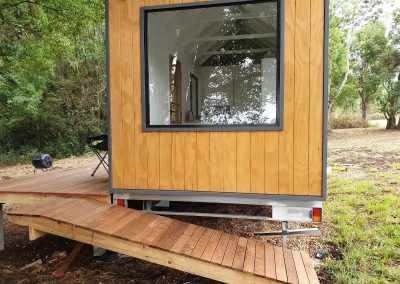 However water was yet to arrive.  There was a mixup with the water tank – the default one was a beige poly tank, not the best idea for a site with the risk of bushfires. So for the first two weeks, while we waited for the metal tank to arrive (and also the week after), we lived out of jerry cans – surreptitiously filling them up at the local park every other day. It’s amazing how little water you can survive on. And how much you can fantasise about having a shower.

Carl built a deck and ramp. An ingenious design, that can slide out so that the tiny can drive away – it is just a caravan, after all. There was a hunt for concrete stumps to build on, for both strength and termite-resistance.  The first signs of Carl’s ramp fetish emerged, with the construction of ramp access to the deck. Eminently practical and strong.

We popped down to Sydney for a week, for a Christmas party, an operation, and to finish emptying the unit at Gosford. Returning again to a dry block, gasping for water.

We ordered a water delivery – 9000L for the tiny tank (2.3KL), and the remainder for the larger 22KL tank dedicated to the fire brigade.

We are completely loving living in the tiny. It’s better than we had ever imagined. And now we’re starting to build our long-term home,  with the beautiful views over the mountain.  Bloody fantastic.