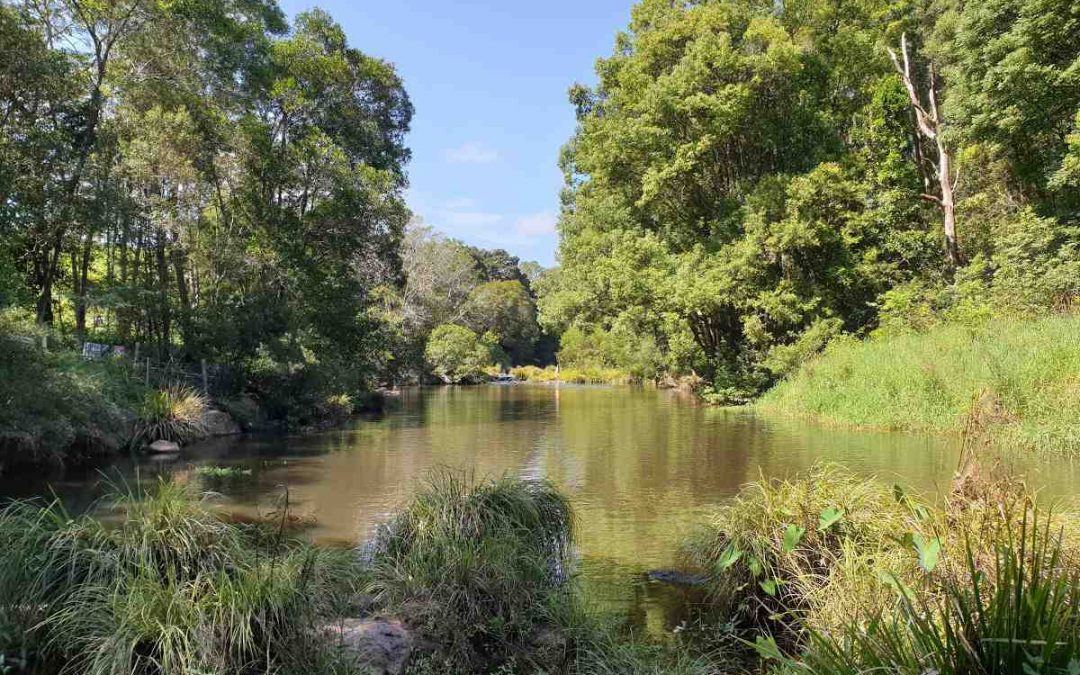 According to Urban Dictionary, Goonengerry is famous for its sick waterholes. Plural. After living here for a month, we still hadn’t visited any of them.

The closest one to us is Keys Bridge, on Coorabell Rd outside Federal, and this was the first one we visited.

We had driven past the waterhole several times without initially knowing what it was. Yes, it was near a bridge, and there were frequently 3-4 cars parked there, but from the bridge you couldn’t even see running water – just large clumps of grass. We assumed it had dried up with the drought. Nope.

So on a hot weekend, we drove down and grabbed a parking spot. It was a challenge, even after school holidays when most tourists had gone back to the cities. It’s on a corner, and you need to be pretty careful pulling over – the parking is just an extended patch of grass and dirt by the roadside.

The path to the river wasn’t immediately obvious, so we waited until another car arrived, and followed them through the trees. It’s only about 40 metres, although in hindsight it was the only real path.

It’s gorgeous. A lovely wide piece of the river, with tiny “rapids” running into it at the far end – a bit too low to be called a true waterfall, but fun and refreshing to sit in. It’s an oasis inside an already beautiful part of the world.

After a hot week, the water was deliciously warm. And it’s weird tasting fresh water, compared to the salt of the ocean.

The rocks weren’t too slippery, but it does start out shallow and there were a few large rocks under the water where you had to gently breaststroke out to the deeper part of the river, up near the rapids.

It’s a good sized area, so you don’t feel crowded if there are lots of people – just swim out further. A couple of local families dropped by, with inflatables for their young kids, which looked idyllic.

It’s very important to take care of the environment while you are visiting. Key Bridge waterhole is on Wilson’s River.
As per the Wilsons River Catchment Management Plan of Rous Country at https://www.rous.nsw.gov.au/page.asp?f=RES-BUN-38-23-04
“The whole of the Wilsons River catchment area becomes our drinking water catchment, stretching from Upper Wilsons Creek and Upper Coopers Creek in the north to Byron Creek in the east (near Bangalow) and Pearces Creek in the south (near Mcleans
Ridges). All flow into Wilsons River and westwards towards Lismore.”

I’ve seen posts on Facebook and one forum that said the area is private property, however it seems to be acknowledged as a local community swimming waterhole, and the parking seems to be part of the zoned road area. There aren’t any Trespassing signs.

However there are signs reminding people not to camp there, as per the article at https://www.northernstar.com.au/news/illegal-campers-you-are-not-welcome/3368219/

https://www.byronnews.com.au/news/high-conservation-value-vegetation-to-be-restored-/1847224/ tells of a Biodiversity Fund grant received for the area, to revegetate areas of the creek, targeting environmental weeds to encourage the return of native wildlife. There is significant landcare activity in progress, aiming to restore the natural flora and fauna of the area, in addition to the need to keep water catchment areas pure.

It’s a beautiful, local way to cool off in summer, without having to face the growing traffic chaos of Byron Bay itself. Enjoy.